The Court of Noke, Edward Bulmer’s Queen Anne Herefordshire home, has been featured in many favourite interiors press and beautiful books, and the rooms receive mass adulation from all over the world on Instagram daily. So when Inigo, the new historic homes estate agents, suggested coming to Edward’s family home, we wanted to showcase a lesser known room, actually the smallest room in the house but one full to the brim of wonder… Edward’s home has been through many transformations since it was first constructed, nowhere is this clearer today – perhaps surprisingly – than in the current ground-floor WC. When you open the former back door of the 1700s Queen Anne style home from the galleried hallway; you’ll find yourself in a room filled with inspiring wall art that allows your eye to travel, books that will give you a new perspective on life (not to mention the local area) and, most notably, a dark wood Jacobean revival box that has always served as a receptacle of reinvention…

But it hasn’t always been like this. Inigo went to Herefordshire to hear Edward plot a 300-year history of the space his loo now occupies and shares how he transformed the room, bringing colour and vibrancy to a room that is so often forgotten. 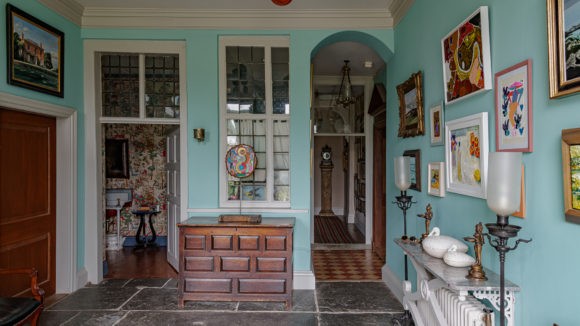 Edward's Hall shot for Inigo in 'Turquoise' leading to the downstairs loo, Photography by Inigo (@inigo.house)

Inigo’s Nick Carvell caught up with Edward to discuss the design inspiration for this space. Edward said, “When we were doing this room up 20 years ago I thought it was really important to do the whole ‘old country house’ thing and disguise the toilet bowl. The easiest way to do this was with one of those English commodes, but they tend to be kind of awkward. However, there was another option rather charmingly called an ‘incontinence chair’, which I installed instead. I bought this one in an old antiques place in Hereford.”

The stunning walls never go a miss and in fact Edward didn’t use wallpaper, as many assume, but instead he chose a fabric by Rubelli, that he and his wife Emma saw in a chateau in France. Edward recalls “It was hung all the way down this big gallery on the first floor and looked stunning, so we asked them what it was. When we got the price, we decided that perhaps it would suit a small room best! The imagery is a paysage with a m’lordy travelling through the countryside on his carriage, with rustic types and little villages and bouquets of flowers.” Originally Edward used an off-white paint for the skirting boards, but then changed to our ‘Navy Blue’. He notes that “An unusual skirting board colour is far more interesting in a small room like this, and it really picks up on the colour of the horses in the fabric pattern.” 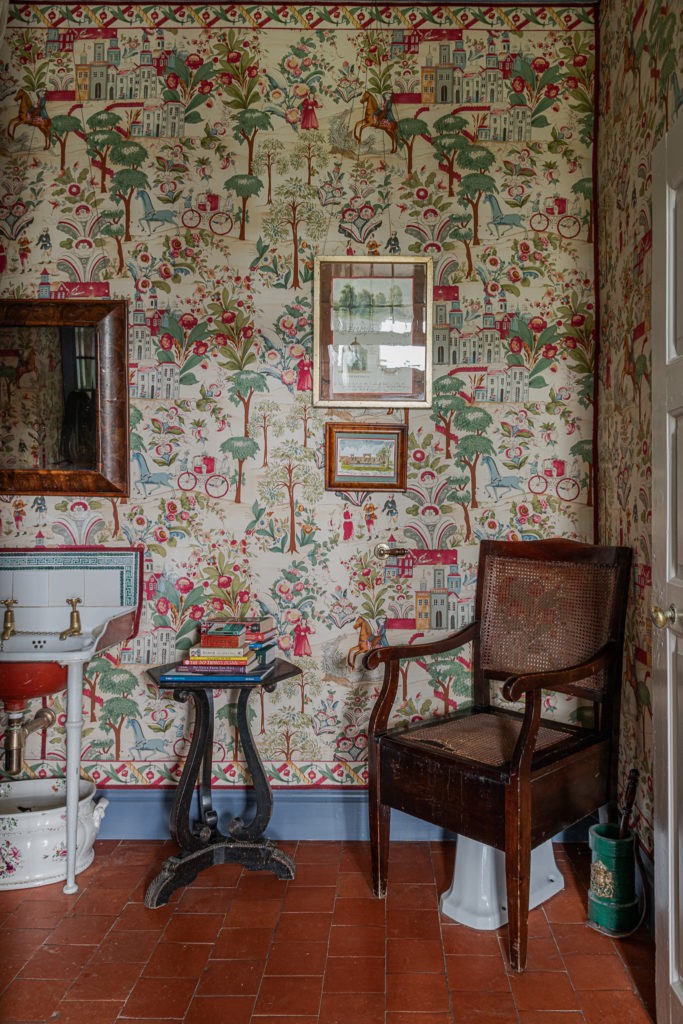 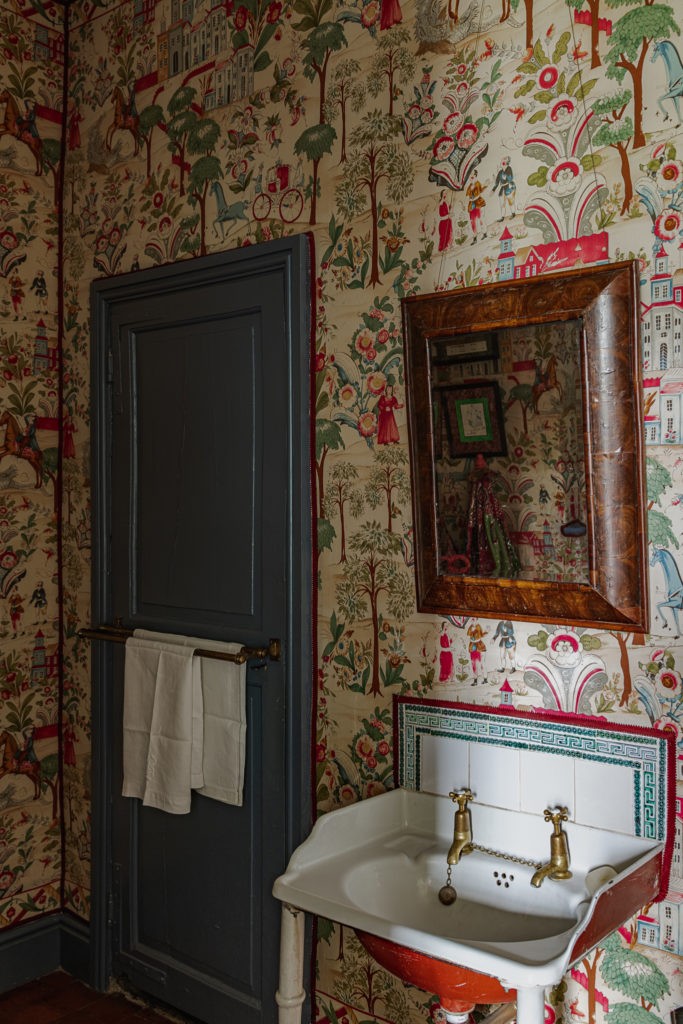 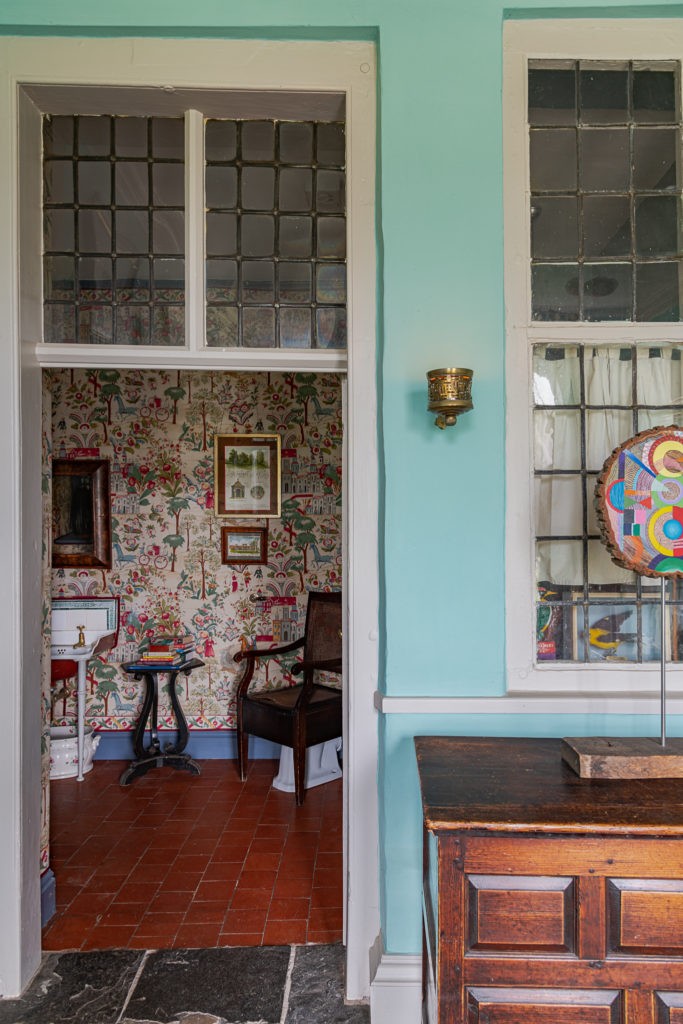 Edward's Hall shot for Inigo in 'Turquoise' leading to the downstairs loo, Photography by Inigo (@inigo.house) 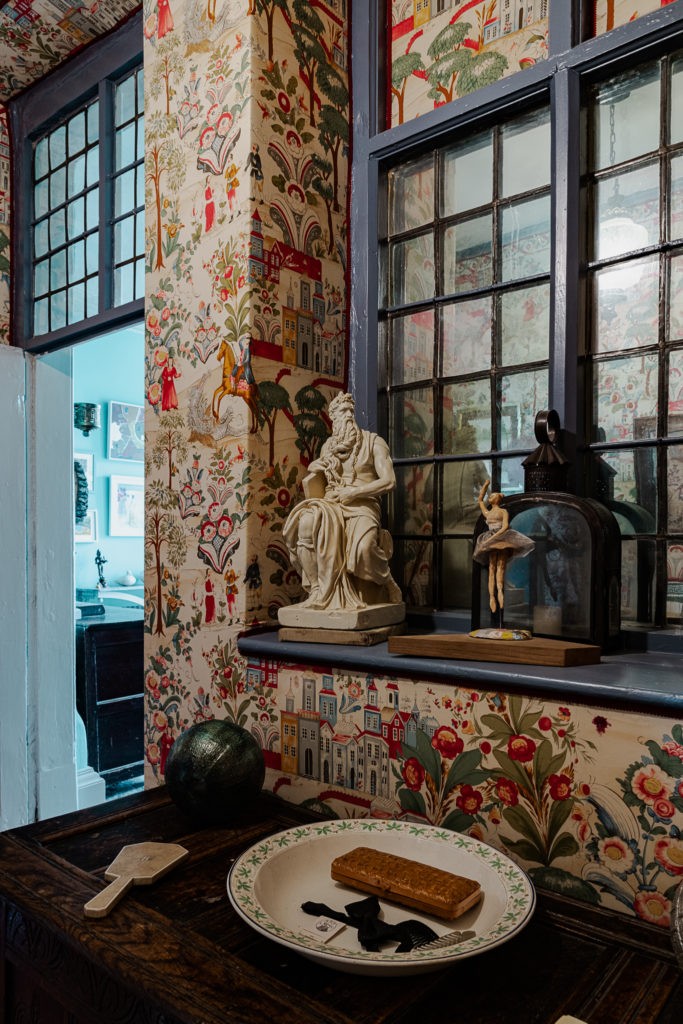 Edward's downstairs loo with 'Navy Blue' on the woodwork, Photography by Inigo (@inigo.house)

The loo has become quite the time capsule for Edward and his family’s travels around the country including a miniaturised plaster figure of Michelangelo’s Moses and a Staffordshire foot bath, which sadly got dropped and now has a hole in it! Edward notes “A lot of people have pictures of them in sports teams on their WC walls, but I’m afraid I don’t have any of that, mostly because Emma and I aren’t really very sporty! Instead, there are designs painted by me for our bed, some garden buildings and artwork for the memorial of Diana, Princess of Wales at Althorp in Northamptonshire that I designed.”

The large Jacobean old oak coffer used to be Edward’s daughters dressing up box when they were little; where they used to store all their fairy costumes. Today it’s filled with all sorts of bits and pieces. Edward says, “Even now, guests will sometimes go in to use the WC and come out as a completely different person.” What a lovely feature from Inigo, thank you for the inspired piece and photos! 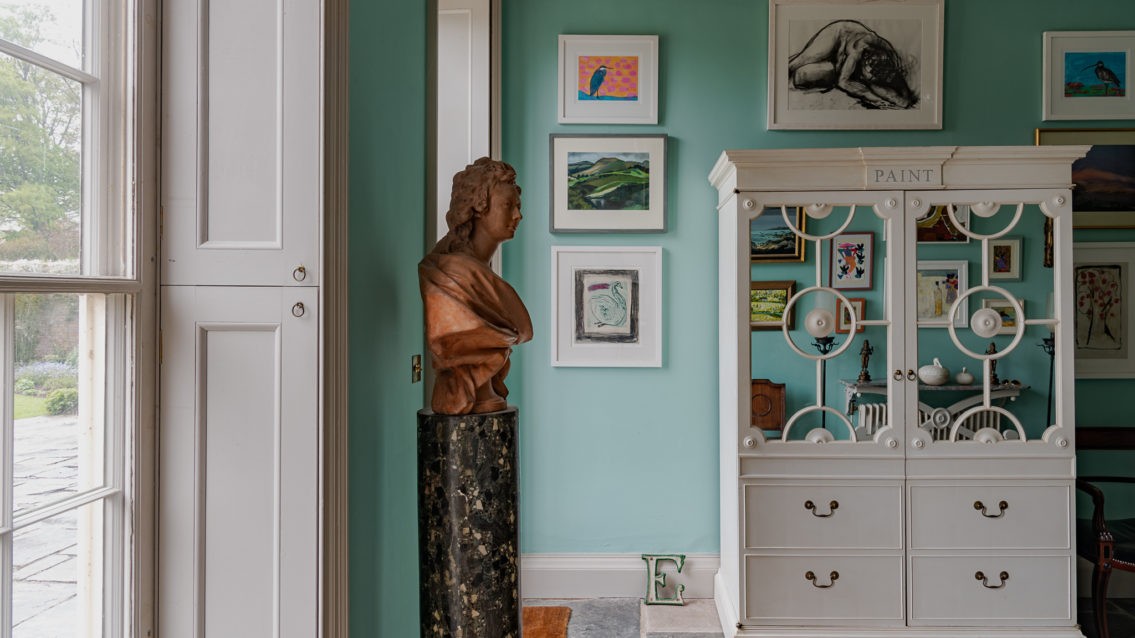 'Turquoise' in the Hall at Edward's home leading onto the WC, Photography by Inigo (@inigo.house)

Nowhere has mastered the art of showing off the most desirable homes for both buyers and casual browsers alike than The Modern House. As a company committed to the preservation of historic buildings for the future, we were delighted to hear that The Modern House were launching a new agency, Inigo, focused on selling historic houses across Britain. Inigo adopts the ethics and fundamental principles that have formed the backbone to The Modern House’s success which has established a reputation as the estate agent of choice for those who place great importance on design and elevated service, and these same principles are the pillars on which Inigo operates.

For Edward Bulmer Natural Paint, Inigo is making all the right moves in the historic housing market, focusing on using restorative processes, sustainable products and conscious collaborations. Our founder Edward started EBNP due to a lack of natural paint on the market for his historic house projects that needed to be looked after carefully and not covered in toxic chemicals and plastics!

We have also partnered with Inigo to give you an exclusive giveaway of 5 litres of paint AND a colour consultancy for up to 3 rooms so you can make sure you pick that perfect colour! Follow the button below to their competition entry page and get entering! Thank you Inigo for this wonderful and unique feature! If you are thinking of moving or would just like some inbox inspiration then head over to their Almanac journal on Inigo.com or follow @inigo.house 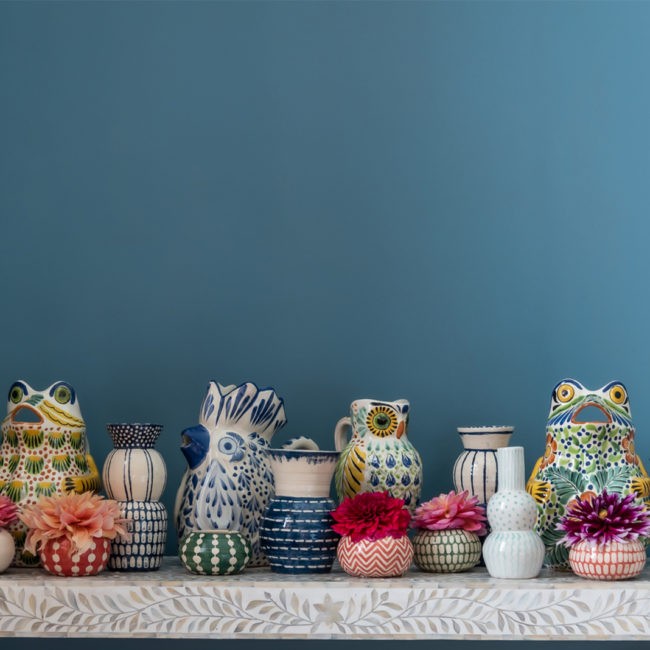 We have teamed up with the doyennes of bright & colourful artisan homewares, Wicklewood, to bring you a series of inspirational and informative colour guides. A celebration of colour and timeless, beautiful interiors. Each guide will be packed full of really useful hints and tips on how to create your dream interior, along with beautiful room ideas to inspire you. 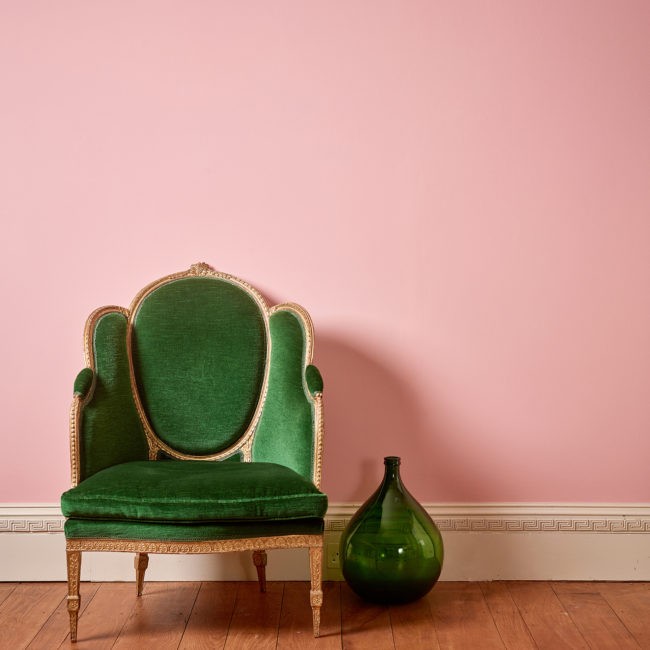 Pinks have undoubtedly been one of our hottest colours for some time now with best sellers; Jonquil, Lilac Pink and Cuisse de Nymphe Emue. If we’d known they would become so popular we might have given them less risque and unpronounceable names, but it seems every one has wanted some of that aroused nymph’s thigh on their walls from studies to bathrooms, period to modern. 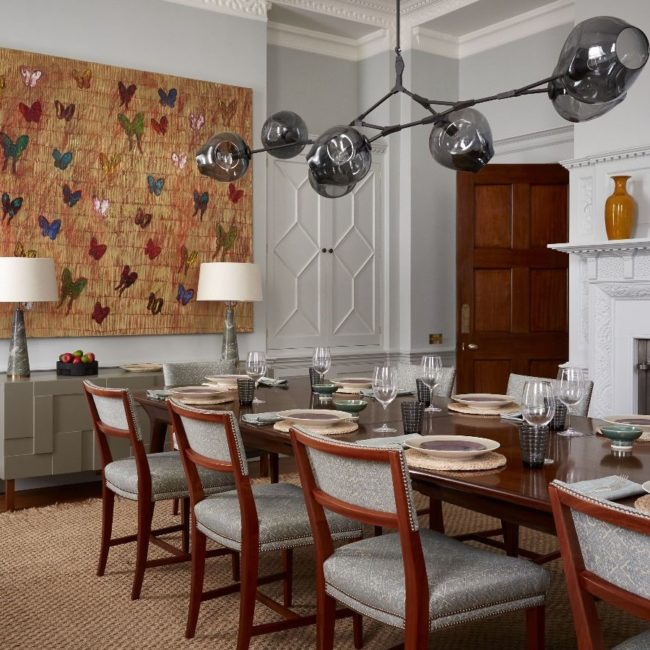 Whilst our paints may provide the canvas, sometimes ‘loud’ and sometimes ‘quiet’, we love to then see a room ‘sing’ adorned in beautiful fabrics with incredible design.
We see designers and homeowners alike dressing their rooms with the wonderful timeless fabrics from the Guy Goodfellow Collection 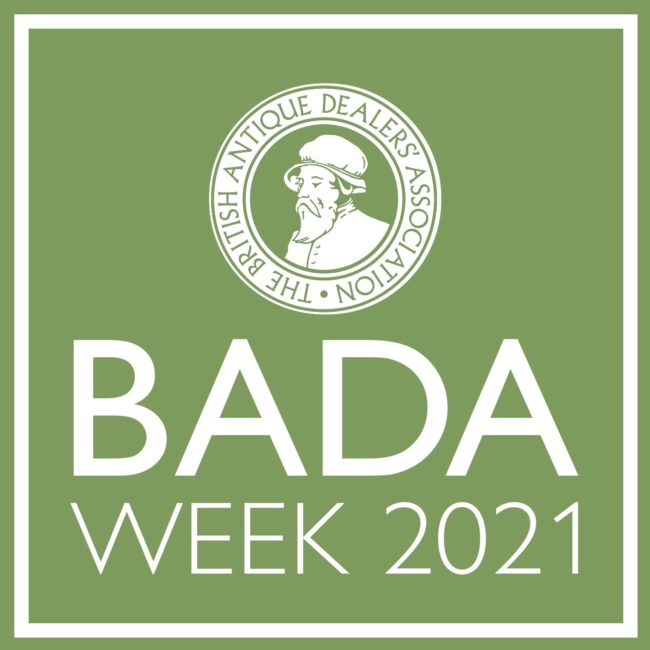 This week is the British Antiques Dealers’ Association Week 2021, which is running until the 17th of October. BADA Week is a nation-wide series of events to celebrate the diverse and outstanding community the BADA represents. To highlight the benefit of visiting their members’ galleries, exhibition spaces, collections and specialities in person with an exciting offering of events both in person and online. 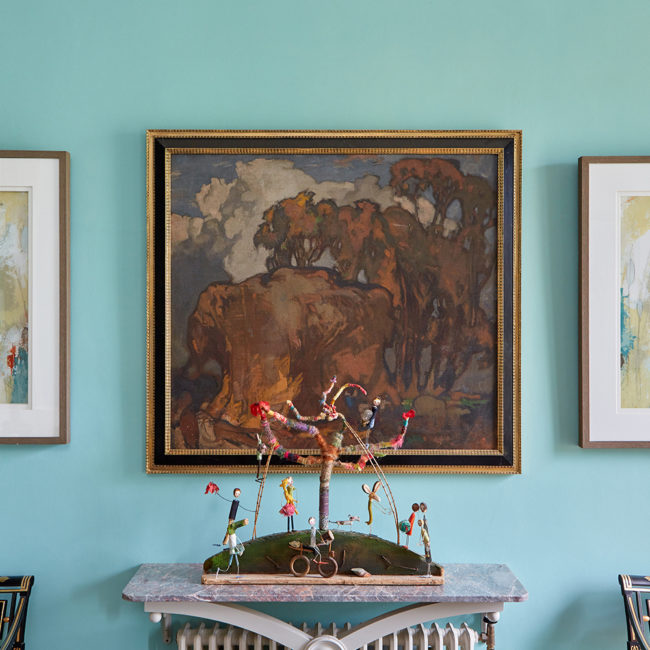 We are thrilled to announce that our colour ‘Turquoise’ has been named Paint Colour of the Year in the Homes & Gardens Design Awards. This dreamy blue is a head turning vivid colour which lifts any room at the same time as having unrivalled depth and softness.

Order one of our free colour charts and discover beautiful colours to decorate your home in.

To use this simple tool please add together the total wall lengths, so the parameter of the room which is the width measurement, then just one height measurement. This amount is based on coverage in 2 coats.